This past week we got to go out to Doffen’s farm and meet him and his owners.   What a beautiful spot.   Doffen’s ‘folk’ have several acres including both forest and pasture, leading down to a small lake on an island, but close to Tønsberg, the oldest town in Norway and now a small city of about 42,000 people.   What a lovely place to live, and what a fantastic life for Doffen!   There are two other female dwarf goats there, one who has just given birth and one who may do so any day now. 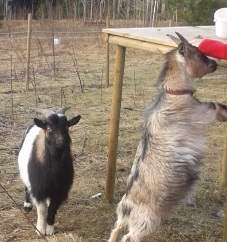 Doffen (left) and a pregnant doe.

Doffen was personable but not cosy with us- of course, we had just met him, and he clearly has some pride!  He is still a teenager, less than a year old, but male african dwarf goats can handle the task at hand when they are only a few months old, as the recent birth of babies on his farm shows!  We noticed how much smaller he is than our girls-  I think Kara may give him a run for his money!  But he is so beautiful, and also gentle.

We took a rag and I tried to get close enough to Doffen to rub it on him, but he was having none of that.   Finally, I put some goat kibble in it and let him eat from it.  When we got home we hung the rag up on the gate.  Kara didnt take much interest, but Izzie rubbed all over it and pulled it to the ground.    Female dwarf goats go into heat about every 21 days, for just a couple of days.  We discussed our strategy and decided the best thing is to board our girls there for a month, to be sure they have been in heat and been serviced.  A month!  I don’t know if I can stand that- I will have to go and visit a few times! 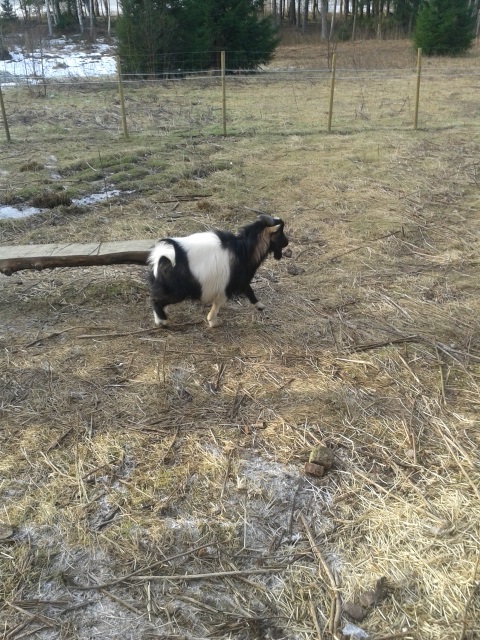 I worry that our girls might not get along with the two other females, especially the one doe who is pregnant, so we decided to wait until after she has given birth.   Our girls will not be on their own territory, so hopefully they will not be agressive, but if they are frightened, I tnink especially Kara might be hard to handle.   We will not know until we try!

This is all so exciting and new to us, and obviously it will be new to our girls too.   If all goes well we will have our girls down in Tønsberg in the next month or so.  I hope they will love the beautiful place, the contact with other goats, and of course, Doffen!

We have found a suitor for our girls!  Doffen is 3-4 years old and lives in Vestfold county.  In Norway, goats cannot cross county lines, so the challange has been to find a suitable African Dwarf goat race to breed our girls. 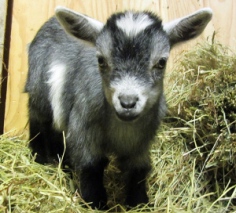 I get to go meet Doffen this week.  After that, the trick is to get the girls down to him when they are in heat.   African dwarf does go into heat about every 21 days.   When I visit Doffen, I will take a rag that I will rub over him, and then bring it back and hang it in our goat shed.  When the girls go crazy over it, I will know they are ready- then it is into the car, down to the farm, where hopefully Doffen will do the rest!  Gestation is 5 months, so we will greet our new babies in the early fall, if all goes to plan.   How exciting!